As part of our science, we have been learning about plants.

We conducted an experiment where we planted 4 bean seeds in separate containers, putting in them different places to grow.  Our experiment was to see if seeds needed sunlight in order to grow. 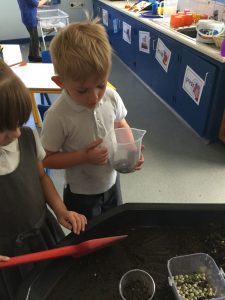 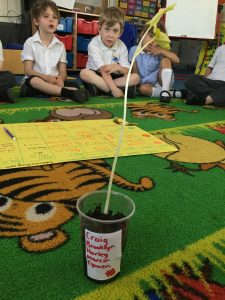 We recorded our results over a two week period and year one have written up some outstanding investigations!  Come and have a look if you like. 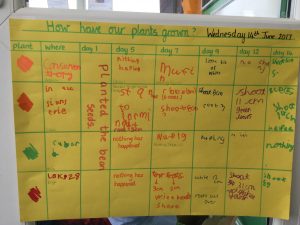 We were amazed to find that the seed we kept in the locker did in fact grow but then we noticed that there were small vent holes, allowing the light into the locker so it wasn’t completely dark.  It was however, unhealthy as there was not enough sun light.

The seed in the cupboard did not germinate or grow at all because there was no light and it was too cold in there.

Our third surprise was the seed we grew in the conservatory.  At first we thought that nothing was happening.  However, we were soon to learn that germination was in fact taking place.  The problem was that it was too hot in the conservatory, meaning that the soil became too dry and hard so the shoot couldn’t push through. 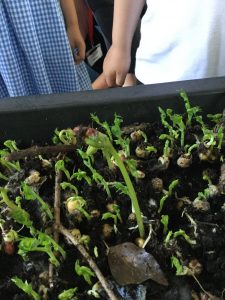 We added some water in there and suddenly we had a field of bean shoots appear.  We decided to leave them to germinate to see what happened and we ended up with a crop of bean plants!!! It was amazing!  Finally when we got rid of them, we lifted the soil which rose up like a carpet held together by way too many roots to count!!